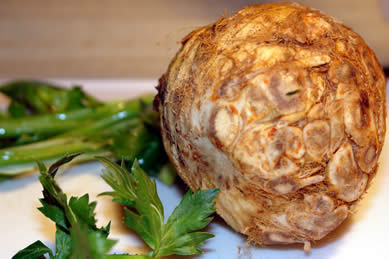 What is it?
Celeriac, or "celery root": highly recommended addition to your gluten-free diet! I don't know where this food was my entire life, but I now know I missed out for many years. We only recently discovered Celeriac while on vacation in England, and have since found it here in the United States after looking around a bit. Turns out it is much more popular in Europe than in the Western hemisphere, which is too bad, since this is a gluten-free food that is simply excellent!

Where to find Celeriac here in the States
Look for the Celeriac in the fresh produce section of a grocer that carries substantial fresh vegetable variety, and from what I have seen in grocers near us, most will sell Celeriac by the pound (vs. piece). So far, Whole Foods Market has been the cheapest at $2.49/pound (Giant Eagle wanted $3.49/pound by comparison). It still may sound pricey compared to a potato, but Celeriac has several advantages I'll discuss here, and I must consider how $2.49/pound is less expensive than many certified gluten-free flours and such even cost.

What does it tastes like?
Think "potato" but with a pleasing celery or celery-seed flavor accent. It is a root vegetable, and like a potato, it can be eaten baked, mashed, boiled, you name it. I find the taste pleasant and mild, but noticeable enough to add additional character to soups and other dishes.

My wife first had Celeriac in mashed form in the UK, and really liked it. I like it baked with a bit of olive oil on it (as pictured below), or I quite often top it with some pasta sauce or homemade gluten-free pesto sauce, a bit of my favorite ground cheese, or many other flavorful topping options.

I'll post a simple gluten-free recipe to get you started with Celeriac in the future - a recipe I really like that is also super easy to prepare; which, is just plain old baked Celeriac like I pictured here. Basically we just chop up the cleaned and trimmed root and bake the pieces on a cookie sheet with some olive oil. I would suggest just experimenting with recipes you use potatoes in already. E.g., if you like Potato soup, Celeriac soup may be a simple alteration. And, mashed potatoes are rather simple to replace with mashed Celeriac.

As for their physical characteristics, the root portion (that you eat) tends to be about 4 to 6 inches in diameter - the one pictured (above) was something like 5 inches across. They have a very mottled texture where smaller roots have been trimmed off already - and you trim this thing down to look more like a trimmed potato when you are ready to bake it. The leafy green tops are, as perhaps you can make out in the picture, look quite similar to those on the tips of traditional Celery stalks. 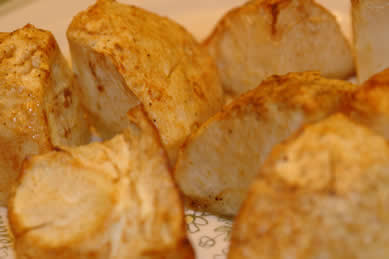 Why eat it? Tasty and Healthy!
Beyond its wonderful flavor and versatility, it makes for an incredibly healthful gluten-free diet food (or, addition to any diet, gluten-free or otherwise)! Celeriac is a low-calorie, low gylcemic-index / glycemic-load food (meaning, great option for diabetics or those with hyperglycemia concerns).

A quick comparison to potatoes can be made, since I look at Celeriac as a more healthful potato substitute (also consider Turnips / Rutabagas - these too offer much reduced calorie and glycemic-index options).

A side-by-side nutritional comparison of some gluten-free and Celiac-Disease-Safe (potato and potato-like) vegetable options appears below to round out this Gluten-Free Blog posting. Check out the dietary statistics, and see how Celeriac (and turnips or rutabagas) can be a great alternative to consider if blood-sugar control, diabetes, calorie restriction / reduction / control, a general weight-loss diet, or other concerns are part of your life:

Thank you for that information. I have a book about Vegetables from Williams Sonoma with celery root in it and I have always been a little afraid to try it, but now I will.

Mmmmmmmm! I love celeriac! Like you though, I missed out on it for a number of years! Try it with other root vegetables, with some olive oil and herbs, roasted! YumYum!

My sister made a Martha Stewart Stuffing with Celeriac, and Gluten Free Angelina's bread for Thanksgiving. The celery root added so much flavor. It was the best stuffing I have ever had! This was my first Thanksgiving since being diagnosed- it was so reassuring to be able to have stuffing!

Thanks for the info. I made lentils with celeriac, a Stephanie Alexander recipe (Australian) and was delicious. Wondered if it was low GI, so it is, great!

I love celeriac, however my research states that it has a high glycemic index. Can you let us know your information source about the GI value?

Check out this link to NutritionData - Celeriac Nutrition Information.

You will see the glycemic-load information, and how this vegetable is super-low , and for good reason. First of all, an entire Cup serving is only 42 calories - 9g of carbs (2 of which are fiber grams). It really is a healthy vegetable and great alternative to potatoes. Too bad it is so expensive at many grocery stores here in the USA though.