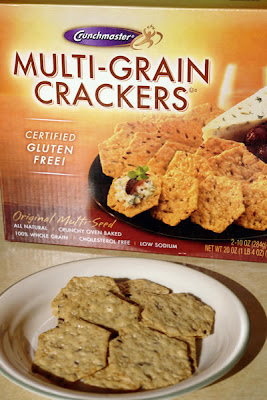 I think these are perhaps the best all around gluten-free cracker I have encountered thus far : the Crunchmaster Multi-Grain Crackers - crunchy oven backed original multi-seed variety. And, I have tried quite a few different gluten-free crackers over the years including others that I certainly enjoy (e.g., Mary's Gone Crackers : those are good crunchy robust crackers in general, though they often taste slightly burnt to me for whatever reason and they crumble a bit more easily than these Crunchmasters).

I found these wonderful crackers at CostCo for 1/2 of what they cost in the local grocery store too: $6.99 for a box that contains two (2) 10-ounce bags (for a total of 20oz of crackers). Still a bit steep on a per-pound basis, but considering that this is HALF what they cost when purchased in much smaller boxes I have found elsewhere, they are a relative deal.

I have taste-tested these crackers with a variety of participating testers: gluten-free / Celiac persons and non-gluten-free persons alike. The opinions of my taste-testers were broadly similar in that everyone found the crackers to be quite hearty and full of flavor from the sesame seeds, flax, quinoa seeds, amaranth seeds, and a bit of tamari (the other core ingredients are brown-rice meal, some potato starch, safflower oil, and a bit of salt).

As the name "Crunchmaster" implies: these gluten-free snack crackers have a very nice crunch indeed! The non-gluten-free people testing the crackers did not find them to be lacking anything when compared to the "normal" (gluten-containing) crackers on the market. We have tried them served plain or with cheese, hummus, and a few other things -- the results were always appealing to the taste buds.

In addition to being crunchy and flavorful, the dairy-free/wheat-free/gluten-free crackers also boast a rather low sodium level (110mg / 15-crackers) coupled with 2grams of fiber, 3 grams of protein, 280mg of Omega-3 per serving, and zero cholesterol; this makes them a rather "healthy" cracker option to consider. They are certified gluten-free by the Gluten-Free Certification Organization (GFCO) and carry a clearly-displayed moniker to that effect. If you want to see more online, here is a link to the Crunchmaster Web-Site.

Bottom line: highly recommended, especially if you enjoy a good crisp and flavorful cracker that goes well with a variety of complementary spreads and toppings!

Joyva Halvah - not so Halvah' good!

I found this gluten-free treat called a Chocolate-Covered Halvah bar at the local Rulli Brother's grocery store a few miles from here in Boardman, Ohio. I read the ingredients-label at the store the first day I spotted them, then came home, logged onto the web, and went to the Joyva Halvah website where I confirmed that the what should be gluten-free truly was (it is also dairy-free I believe).  Note: at the time of writing this, the product is gluten free, but I always suggest reconfirming the status prior to purchase. The next trip to the store resulted in a purchase and evaluation.

What interested me initially was that the core-ingredients were ones I tend to enjoy the tastes of: sesame and chocolate, and a bit of vanilla. The remaining ingredients are ones I would generally consider taste-inert: corn syrup, sugar, oil, and cocoa butter. I figured this could all make for an enjoyable treat; I figured wrong.

I did not care for the taste or texture of this gluten-free halvah. The bar, contrary to my initial presumptions, actually tasted rather greasy or something, and the oily nature of the bar overwhelmed both the chocolate and the sesame — a feat I did not quite think possible when the first ingredient on the list was sesame. The texture was odd too. Next, the calories are immense for a 1.75 ounce bar: 340 calories! eek! Had it tasted great and had a nice texture, those calories would not have stopped me from consuming it all... but, as it stands, I found this product not worth eating in its entirety.

Maybe there are better gluten-free Halvah products out there to be tried yet, or perhaps it is just an acquired taste or something. But, my initial impressions are that halvah is just not for me — gluten-free or not. Maybe you have tried some types and liked them? If so, great... if not, I can not personally recommend this as a gluten-free treat that I find enjoyable.
Posted by Mike Eberhart at Wednesday, January 20, 2010 16 comments:

I posted a brief article back in March of 2009 here on the Gluten-Free Blog about the impending release of the General Mills reformulated Chex cereals that were publicized and labeled (quite clearly) as Gluten-Free, with same great taste as before GF. Since then, those products (which include Gluten-Free Corn Chex and Rice Chex, Gluten-Free Cinnamon Chex, Gluten-Free Strawberry Chex [update: this one seems to have gone away], and Gluten-Free Honey Nut Chex and even Chocolate Chex and Vanilla Chex) have been released and are available in store.

But, there has been quite a controversy about whether these Chex products are truly "gluten-free" as advertised — at least, there sure has been a lot of discussion alleging the presence of gluten in these new "gluten-free Chex" per the comments people have posted on my original blog entry over the past year; and, I have even received Emails detailing similar concerns and allegations that people have felt compelled to send out in wide-dispersal to myself and anyone else in the gluten-free community (in hopes we would post their GF disbelief on our sites apparently).

So, what to make of all this?

IS THERE Gluten still in Chex Cereals?

It is quite apparent that more than a few people think Chex cereals, regardless of their "gluten-free" emblazoned box-covers, are somehow "poisoned" with gluten — perhaps there is something gluten-related going on here, or perhaps it is something else.

Why do I say this?

Well, my wife can eat all the gluten she wants (i.e., she does NOT have Celiac disease or anything), but yet she can not eat the Chex products because they have repeatedly caused her to experience all sorts of stomach / GI discomfort. I also found that, although I can tolerate some of the Chex cereals, if I eat them for any length of time, they cause me GI issues too.

Well, MY issues can be explained by potential gluten, but my WIFE's issues cannot. We started experimenting... and, given how simplistic the Rice Chex ingredients are (rice, sugar, salt, molasses, and Vitamin-E and BHT for preservatives, there was only one potential culprit besides (alleged) gluten contamination to investigate: BHT (the artificial preservative).

We tried a few other food items that are otherwise gluten-free but contain the preservative BHT, and have had the same issues with those other products as well.

So, this is ONLY a wild guess, but is it possible that what people, or at lease *some* people, are taking to be a "gluten reaction" is perhaps a reaction to the darn BHT companies use "to preserve freshness" in their products? I have found that MY body despises the stuff, and that my wife's body definitely disagrees with BHT as well (and she is NOT sensitive to gluten - she can eat as much normal wheat-based pasta and bread as she desires without any issue). This may or may not be what is to blame for what some are assuming to be a "gluten reaction", but no matter what, the chemical causes issues for my wife and I.

UPDATE, 2017: I noticed that on the Chex cereal product page, perhaps in response to what BHT did to some people and the controversy pointed out here, they have adjusted their recipes and now clearly state that:


"Chex is real, good food made with simple ingredients. Simple because we don’t have artificial colors, flavors or preservatives (BHT). Six of our seven flavors are gluten free."

I hope this remains the case, as it sure sounds like a welcome improvement. Here's hoping this makes Gluten-Free Chex a cereal option everyone can trust.

I tend to try to deal with things in, as best as possible, a more scientific approach and not just draw conclusions, regardless of the fact that the obvious conclusion we Celiac Disease and Gluten-Free types would draw if we present with a reaction to a particular food: that there is potential gluten-contamination in that food (be it Chex or any other products that lead to a "reaction"). But, when a product is supposed to be gluten-free, I can not help wondering what exactly is going on. Without the rigor of scientifically valid double-blind, placebo-controlled studies, it really is hard to pinpoint, with exactitude, the true cause of some things.

Note: given the comments left on my prior blog about Gluten-Free Chex products, before arguing how you just "know" there is gluten in a product based on your body's reactions, I am not saying that you are wrong... I am just saying that true "proof" must be demonstrable in a more rigorous setting if that proof is to be taken as fact by everyone else. I have, on many occasions, suspected a particular item I consumed contained gluten, just based on symptoms I had following ingestion — but, I have also, on multiple occasions, done my best to perform a "double-blind", or even triple-blind, on the same item (ESPECIALLY if it should be completely gluten-free), separating such experimentation by substantial periods of time, and even with the exact same box/can/jar/etc, with outcomes that have proven some things to be completely safe that I previously suspected as "contaminated". Sure, my sensitivity to gluten may vary over time, or vary when consumed items are combined differently with other dietary intake, or be explained by a multitude of other things, but my approach has worked rather well for me. I also will not put myself at risk of substantial harm doing such experiments either: if I have a really bad reaction to something and I know with reasonable certainty what the culprit is, it is gone for good.

In the end, the only thing that truly matters is making sure that what you choose to eat does not cause you harm. I personally want to know exactly what is to blame for any such harm, whenever it is possible.

Continue to read this Gluten-Free Blog for all sorts of gluten-free recipes, product-reviews, and related information. In addition, visit my Gluten-Free Recipes Site where many of the recipes I have featured on this blog are available.
Posted by Mike Eberhart at Thursday, January 14, 2010 33 comments: