No Milk or Ice-Cream, No Problem...
Sometimes I find myself craving a nice cold milkshake, especially in the Summer months, but at the same time I find myself not wanting all the calories and/or dairy products in my diet.  In general, I do not even keep milk in the house unless there are plans to bake something that calls for it, so that gives me further reason to search for alternatives to milk when fulfilling my "milkshake" cravings.  And, if milk is rarely kept in the house, ice cream is even more rare.  So, what to do?

I now have a solution that I can keep ready for any short-notice "milkshake" desires...

Frozen Watermelon to the Rescue
My wife had recently been called away to an out of town business meeting on short notice, and there was a large watermelon, already cut open, in the fridge that was bound to go bad before her return.  She decided that the quickest way to temporarily avoid the issue of what to do with the melon was to simply chop the edible pink portion out and place those chunks in the freezer to deal with later.

A week or two later, after her return, along I come with my cravings for a nice cold milkshake to take the edge off the Summer heat.  I'm searching the kitchen for whatever "recipe" components I can find (I tend to innovate each time, so "recipe" is used loosely here).  I start retrieving some of the regular constituent items: cocoa, vanilla, cinnamon, and whatever else I can find that sounds yummy at the time (including a bit of Kahlua)!

But, the question remained: what will the "core" components of the recipe be this time in order to get that nice, creamy, milkshake consistency that I want, but without any ice-cream or milk available.  I start digging through the fridge, and then the freezer... I spot this container full of an unknown substance that I soon identify as frozen watermelon.  My wife is on hand to tell the story of how it got there to begin with; she then decides it shall be her time to experiment and help me create a milk-free and ice-cream-free milkshake, using this frozen watermelon as the basis for the drink.

So, into the blender went: a frozen banana (also stored in the freezer), some ice cubes, and a pile of frozen watermelon chunks... 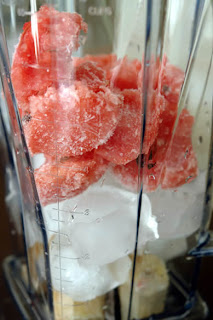 I am quite used to experimentation when it comes to my gluten-free diet, as I am always looking for new ways to improve the taste and texture of foods I consume, but when I saw all that watermelon headed for the blender, my first thought was: "uh,... wow,... I wanted a chocolate milkshake, and I am going to get a watermelon smoothie". :)

But, with the addition of the remaining components -- cocoa, and LOTS of it; some Agave Nectar and/or Honey; a bit of Vanilla; some Rice Milk; and optionally, a bit of Gluten-Free Isolated Whey Protein -- things were looking more promising.

The Results : Great Milkshake without Milk or Ice-Cream 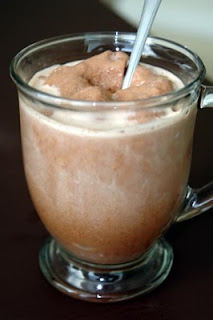 The frozen watermelon really does the job when it comes to making the milk-free and ice-cream-free "milkshake".  The flavor of the watermelon easily disappears into the milkshake behind the cocoa; I was at first concerned it would dominate the taste, but on the contrary, I can not even taste the watermelon.

The watermelon has some proteins and fiber in it that really help thicken up the "shake" in a way that is just not going to happen with ice-cubes alone.  Adding a bit of whey-protein can further thicken the shake up if you choose, but that would make it technically not dairy-free if that is a huge concern for you (though it will introduce no additional fat calories, as it is pure protein).

In the end, this "milkshake" is not only delicious, but it has a great consistency that is thick and convincingly like the real thing.  In addition, it is rather nutritious.

Nutrition:
The only source of fat in the drink is from the little bit that is introduced with the cocoa powder.  And, speaking of cocoa : it adds a nice amount of fiber to the drink (not to mention flavor!), while also being rather good for you because of the antioxidants and flavanols (see my previous Gluten-Free Blog entry: Dark Chocolate / Cocoa Lowers Blood Pressure).  The watermelon brings a load of Vitamin-C and Vitamin-A with it, as well as being a rather plentiful source of Potassium.  This milkless milkshake will also contain essentially zero sodium.

I have featured some other dairy-free milkshakes / frozen drinks here on the Gluten-Free Blog before that also bring similar health-friendly nutrition with them, but this watermelon-based formula is perhaps one of the simplest recipes to play around with.  We also have used Chia-Seed and Pumpkin, as featured in this recipe: Gluten-Free & Wheat-Free Dairy-Free Chocolate Pumpkin Spice Diet-Milkshake Recipe from a while back.  I enjoy that one quite a bit too, but it takes planning (I need to keep my frozen chia cubes handy, which I sometimes forget to make).

The Recipe - Varied, but something like this...
First of all, what a great way to avoid throwing any extra watermelon away.  If you have a large watermelon and know you will not be able to consume it all before it starts to go bad, simply freeze part of it.  For ease of use later, cut the watermelon into small enough pieces to 1) fit in your blender and grind easily enough, and 2) to actually be able to get any pieces apart (if they freeze together).

Perhaps the best way to freeze the watermelon would be to place the individual pieces on a cookie tray or such, and freeze them, and then move them into a more condensed space.  But, we have just placed all the chunks of fresh watermelon in a large plastic container in the freezer, and then carefully used a strong knife to pry/chisel them back out as needed (this method is quicker initially, but takes longer to get the pieces loose when you are ready to use them).

The "recipe" will vary as you choose, but to give you an example of what went into this particular (pictured) milkshake, it was approximately as follows:


Blend away!
We have a Vitamix blender that makes short work of this job.  We also have a standard blender that we test things in, and it was able to handle the job too, though it took somewhat longer.

We have taste-tested this "milkshake" even on all sorts of people including unsuspecting children, and it has been a nearly unanimous success.  With kids, the key has been to not let them see what is going into it; the only one that "detected" watermelon was one that watched it being made. :)

Well, I hope you enjoy this latest gluten-free recipe.  I count milkshakes as a gluten-free dessert as well as simply a nice gluten-free snack during the Summer.  And, I quit counting how many of these I have consumed this year already, as I have lost track.  I have made all sorts of variations by experimenting with additional fruits and ingredients, with only a few less-than-ideal flavors; I am hooked, and we now have a container of frozen watermelon in the freezer at all times!