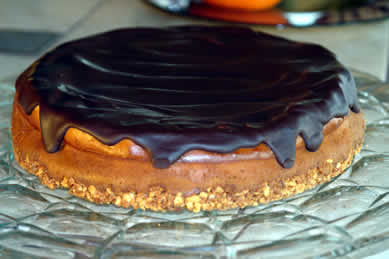 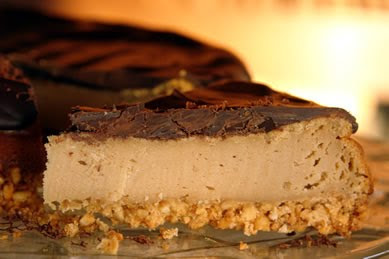 The above pictures show a recent gluten-free cheesecake recipe we were experimenting with. This was to be a gluten-free peanut-butter-cup cheesecake of sorts (peanut butter cheesecake, with peanut-infused crust, all topped with a chocolate layer). Well, even though it *looks* rather good, it was just "OK", and needed some more fine tuning.

So, the question became: what to do with an entire cheesecake that does not meet the cut?

To begin with, I ate a fair amount of this cake myself. Like I said, it did not meet the cut for what I consider "top of the line" desserts, so the recipe will get tuned further before release to the public. But, it was not TOO bad,... it mainly suffered from texture issues, and was a bit thicker/springier than I wanted. It lacked some of the smoothness and creaminess that it should have had (I think there was too much peanut butter proportionately, and the next attempt should perhaps use part Marscapone cheese instead of all Cream Cheese - which is substantially thicker than the former).

But, I tired of this cake, and contemplated its removal from the house.

Perhaps the Mouse / Mice will like it?!
Instead of just pitching the cake into the compost, I decided to address a second issue of the moment (or season)... one that is an inevitability of country-living from what I have determined through conversations with everybody else living in a 20 mile radius here in the country: mice!

Well, it turns out that this time of year is especially prone to mice wanting to move into the house. When the farmers pick the crops and return the fields to nothing more than a bit of thatch, the mice seem compelled to seek refuge in some place a little more stable - and warmer - the closest human residence!

Trapping with Cheesecake
We use these really effective no-kill traps (we refuse to kill animals that are not of any threat to us). And, experimentation with baits had previously determined that the only thing more desirable than cheese was peanut-butter. So, how about a gluten-free peanut-butter-cup cheesecake instead?

The results are clear: mice prefer this cheesecake to all other bait by a factor of about 4 to 1. Seriously. They will ignore traps containing just cheese, and/or just peanut butter, and choose the mouse-bait recipe containing both of their favorite ingredients in one -- PB Cheesecake.

One of our catches: 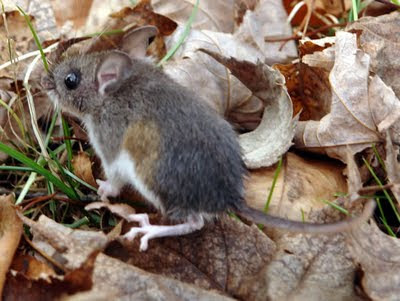 Isn't it cute? The leaves around it should give a sense of scale... it is only about 2 inches long (tail excluded).

This one had very distinctive markings: those little tan patches on each side coupled with gray. Most mice have been either all gray or all tan, but this one was a hybrid. And, after release, it posed nicely for the picture, holding still for nearly a minute as I talked to it and told it not to return (I do no think my speech helped: I swear this SAME one showed up for "seconds" 2 days later). Oh well. I have a lot of cake for it to eat while I figure out where it gets in.

And Another...
We have also had these ultra-cute "Meadow Jumping Mice" (credit: picture borrowed from someone else online -- ours looked identical, but did not hold still for a photo): 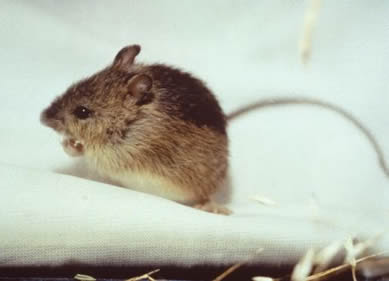 These guys are SUPER TINY... barely 1-1.5" around when sitting like this. And, they "hop" around like little kangaroos. We see them hopping around outside the basement windows every so often, collecting grass and seeds (and, probably hauling that back into some nook of our house.). They might as well be a wild pygmy hamster or pygmy gerbil or whatever. Very, very similar. Too bad I got rid of the aquarium when we moved, or I would have been tempted to have one as a "pet".

Eradication continues...
I still have a lot of that gluten-free peanut-butter cheesecake recipe (attempt) in the fridge where it should last long enough for me to figure out where these little critters are entering the place from. Although they are cute and all, I wish I could just enter into a pact or accord with them whereby I deliver the cheesecake to some OUTSIDE location for their consumption, and they stay out of my house, instead of me needing to bait the no-kill traps that then force me to take them for a nice long walk out into the woods or field for release. But, such is... country living! 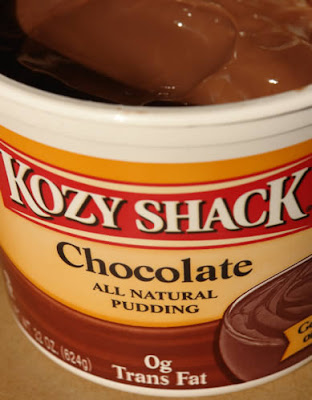 The deciding factors for the purchase: clearly labeled "gluten-free" on the back, and the ingredient list was not too far from "homemade" (the only difference being the addition of carrageenan; a thickener / gum). Aside from that, it is just what you might expect in a chocolate pudding recipe: milk, sugar, tapioca starch, cocoa, salt, and natural flavorings. I had other pudding options to look over in the store at the same time, and the "competition" (that lost out) all suffered from a variety of issues like not being labeled gluten-free, or being full of artificial stuff, or even more gums and thickeners, etc. Kozy Shack passed my first test, and now it just had to make it home for the taste-test...

Taste and Texture
This pudding is really, really good! The thickness/consistency is nearly perfect: it is not too thick (not over-gummed!), but instead it is in my opinion just right - the thickness that a good pudding should present with. Kozy Shack is definitely satisfying with a smooth and creamy texture, and plenty of chocolate flavor from ample amounts of cocoa. It tastes natural from start to finish - no chemical/artificial taste or aftertaste like some other puddings I have encountered in the past. This Kozy Shack chocolate pudding is quite similar to a homemade gluten-free chocolate pudding in both taste and texture, but without the effort of cooking yourself.

The container I found was 22-ounces in size, which is to yield about 6 servings of 1/2 cup each, and 140 calories each. Well, this is where my only problem comes in: I consider this container to be about two servings -- one for me, and one for my wife :) We both really loved the pudding, and it definitely did not last long. We could use the excuse of "getting our calcium and protein" in our gluten-free diet perhaps, but the fact is, it just really tasted great and made for a nice dessert / snack.

I give this Kozy Shack gluten-free dessert a definitely-positive recommendation. Now, I look forward to trying their OTHER desserts / snacks, which include tapioca pudding, flan, and some others - including sugar-free varieties and soy-pudding varieties (presumably targeting dairy-free diets). I checked the Kozy Shack web site to see what their gluten-statement is, and it says:

I like being able to quickly locate that type of Celiac-friendly information, both on the web, and on the physical products... now I need to track down that flan of theirs to evaluate - and in two varieties! Yum!
Posted by Mike Eberhart at Monday, November 16, 2009 9 comments: