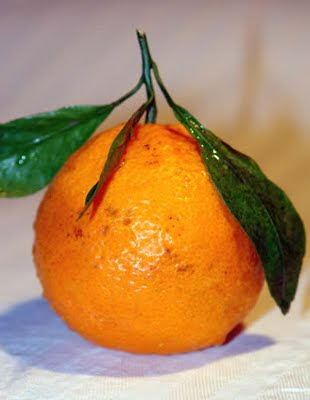 This new cheesecake formula has moved the dessert into my "top 10 list" for now, and I have had the pleasure of enjoying two of these cakes in the past couple months - it is always good to double-test recipes before publishing (and, double-eat too!) I was hoping to share a more complimentary photo of the end-product, but my picture suffered a bit and does not really make the new cheesecake recipe look as good as it tastes; the piece cracked a bit getting it onto a plate... oh well. But, it is good enough to get the idea I hope: 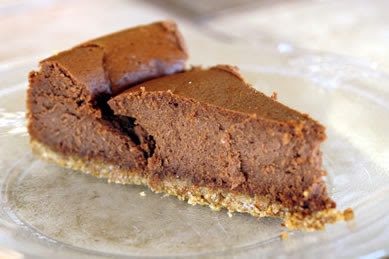 I may be a bit biased about how great this Gluten-Free Chocolate Orange-Juice Cheesecake tastes, but I find it to be fabulous. Full of chocolate flavor, plenty smooth in texture, and a very sweet orange taste throughout too.

It reminds me a bit of a chocolate Tobler Orange (actually, I believe they changed the name of those to Terry's Chocolate Orange now - produced by Kraft foods), where chocolate combines wonderfully with the semi-pronounced taste of orange (from orange-oil). But, unlike those Terry's chocolate-oranges, this dessert does not get split into 20-segments resembling slices of an orange; in fact, if I had my way, it may only get split into 2 pieces... one for me, one for my wife :)

The recipe came about rather by accident: a lack of fresh oranges in the house made the move to frozen orange juice concentrate a move of desperation that resulted in taste sensation. In addition, it makes it much easier to make, since the need for fresh oranges has been removed. And, my wife made this recipe even easier by using standard chocolate-chips (so you do not need to worry about baker's chocolates and/or weighing chocolate). We hope you enjoy it!

Here is a link to the Gluten-Free Chocolate Orange-Juice Cheesecake Recipe on our website's recipe library. We're using an adapted crust from another one of our cheesecakes (from our cookbook), but any favorite crust should work fine. My preference for cheesecake crusts include ones featuring nut-meals, coconut, and the like. They are rather simplistic formulas, but very tasty.

And, though it should be obvious, this OJ Cheesecake is gluten-free and wheat-free, but not dairy-free. And, before anyone asks, I took the picture of the Orange a while back... it was not available for this recipe. It is actually what I believe to be a Satsuma-Mandarin-Orange that I got at Whole Foods, and I really liked how the leaves were still intact: made for a good photo.

Hey everyone, I do not know if any of you readers subscribe to Delight Gluten-Free Magazine, but if you do, watch out for a problem with the recipe printed on page 54, caled "Texas Bean Soup In A Jar". The recipe (accidentally) calls for barley pearls / pearl barley.

Now, I have not seen this issue personally, but a gluten-free friend of the family that did see it sent me an Email asking me to inform people to be mindful of the fact that barley does contain gluten and that the magazine is *wrong*. All of us longer-term Celiac and gluten-free diet types may well know this, but just in case anyone less familiar with the limitations of the diet decides to cook the soup for themselves or for another person that must remain gluten-free, it could lead to a less than optimal holiday season.

Our friend Sande contacted the magazine, and the following is the exact message she received back from Vanessa Maltin, the Food and Lifestyle Editor, who also said to feel free to share this information.

"I know---it happened because a designer added in her own recipe after the article content had gone through proofing. She has been terminated from the Delight Staff. Julie is putting together a blast to send out to all subscribers notifying people about it and will be posting it on the website. " (Julie is Julie Ann Luse, the Editor in Chief)

Hopefully none of you readers has accidentally included the forbidden Barley in any gluten-free soups or other recipes because of this. This type of situation just reinforces what I tell everyone: always be well informed, know your gluten-free diet constraints well, and proceed with caution (the latter part being more targeted to gluten-free foods and ingredients purchases; but, I guess it also applies to taking recipes for face-value too).

Thanks for the heads-up Sande!