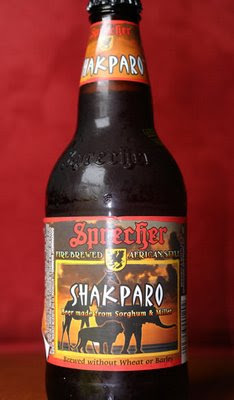 This Sprecher Shakparo gluten-free beer was a new discovery for me, having just come across it at our local Heinen's supermarket here in the Cleveland area. I only drink been occasionally, but when I do, I like to try out any new gluten-free beers I encounter to see how they compare to my memories of "real beer" (from the pre-gluten-free days).

I must say, I rather enjoyed this Specher Brewery's creation - it goes a bit further than the standard sorghum-only varieties of gluten-free beer I have tried in the past, as the Sprecher beer ingredients (or beer recipe) makes use of both sorghum and millet. Many of the sorghum-only beers are just a bit too sweet for me and rather unremarkable. This beer has a bit more character and depth, and did not strike me as being as sweet as something like AB Redbridge.

Here is a quoted description of this wonderful gluten-free beer from the Sprecher Brewery web site:

"Sprecher's gluten free Shakparo Ale is a West African Shakparo-style beer brewed from sorghum and millet. An unfiltered, light, crisp ale with a cider or fruit profile and a dry vinous aftertaste, it is best characterized as an easy-drinking or session beer perfect for summer gatherings. This beer pairs nicely with lighter fare such as sandwiches, salads, chicken, fish, and spicier foods. [Mike's comments: we have also used this beer when baking some really nice beer-marinated Chipotle chicken and other recipes, and it works quite well, adding a nice flavor to the final product!]

Originally conceived of in an effort to provide a traditional African style beer for Milwaukee's African World Festival, our Mbege and Shakparo have won the hearts of people here at the brewery and have been promoted to year round beer status.

Because barley and wheat are not grown in large quantities in sub-Saharan Africa, traditional Mbeges and Shakparos are brewed with sorghum and millet and are therefore able to be brewed gluten-free since neither sorghum nor millet contain gluten. Being gluten-free make Shakparo and Mbege excellent alternatives for those suffering from celiac disease, a genetic disorder that inhibits the digestion of gluten. Our Shakparo and Mbege offerings have been brewed with celiacs in mind and are carefully crafted to ensure they remain gluten-free.

That is some rather detailed description -- especially this "bitterness units" and such, since I have no idea what it means, but it sure sounds technically impressive :)

They have another variety of gluten-free beer on the market according to the Sprecher Brewery's web site, but I have yet to find it at a grocery near me -- it is called "Mbege" and adds bananas to the recipe also! That sounds quite intriguing - so long as it is subtle addition.

I need to update my Gluten-Free Beer Comparison blog from back in September 2006 to reflect this new and welcome addition. This Sprecher Shakparo beer compares quite favorably and brings with it a welcome new option for those moments I find myself wanting a beer (which, lately, with all the massive house-painting efforts, has been more frequent than usual. heh).

I am still awaiting a more creative, darker, more robust beer though... please, someone out there, bring forth a gluten-free dark beer or gluten-free stout that uses some gluten-free oats, teff, or a mix of other darker gluten-free grains that could bring new life to GF Beers. In the mean time, this beer will tide me over.

Thanks for the info. I was unaware of gluten-free beers that one might find at the local store.

Is this beer flavored with hops, i.e., is it a European or American-style beer? I ask since I'm guessing that hops were not traditionally available in Africa.

We just had some GF Beer in teh US and it was intersting.
With the rest of the six pack we made Pizza dough. Incredible flavour!

Thanks for the tip on this gluten-free beer! I haven't seen it in the stores here in Portland but I'll try to track it down. I too would love to have some dark beer options. Have you tried Green's Dubbel Dark Bock? I learned recently from a brewer friend that the problem with brewing a dark beer gluten-free is that the grains need to be roasted to provide the dark flavor and color. Most GF grains are too small to roast easily, and are not commercially available in roasted form. I'll let you know if I come across anything new, though. Thanks again for the tip on the shakparo beer!

Thanks for this! I was just diagnosed with celiac a few weeks ago. My husband, who is a homebrewer, and I were just talking about making some gluten free beer. Since I was in the Peace Corps in West Africa, I immediately thought of millet beer (which was called "dolo" in Mali). I'm glad to see it's available. I'll see if we can get our hands on some of it in Boston!

I just contacted Sprecher...you must have found some old stock, they aren't going to make any more GF beer in the near future.

The darkest GF beer I"ve found is from Belgium and it's called Greens. Their Endeavour is nice and dark, but a far cry from a guinness. ;(

I'm sure my son will be interested in this in about 15 years...

I think this is awesome! What a great thing. Allow people that have a hard time enjoying the finer things in life to enjoy one of the greats (in moderation of course)